The Battle of Kohima is virtually unknown in the world apart from those remaining Veterans who fought so bravely against an implacable enemy who would not give an inch in retreat even onto death. The families of those men will also know and remember. Indeed it is unlikely that they will ever forget that loved one who failed to return from battle.  The Battle was able to be fought because of the steadfastness of the approximately 1500 men of the British & Indian Armies who stood against some 13,500 soldiers of the Japanese 31st Division and held them for 14 days of continuous hand to hand battle during the Siege of Kohima until relieved by the men of the British 2nd Division. It has been said that the fighting between 4th April 1944 and 22nd June 1944 was the fiercest fighting by British force of arms in the whole of WW2. The Battle ground was also likened to the Somme of WW1 because of its utter desolation. Each of the units involved in the fighting will no doubt have their own Roll of Honour in their separate Museums and Regimental Headquarters. The Commonwealth War Graves Commission also has all of the names of the men and women who fell for the cause of freedom in both World Wars. However, the men from the different regiments, corps and countries fought and died together at Kohima, so it is only right that they should be remembered together.   The Roll of Honour on this website aims to do this. In addition the complete roll will be placed in a loose leaf book and held in the Kohima Museum in York. If you look for a name that should be there and isn’t, please let me know. If you find a name that shouldn’t be there but is, please let me know.

Despite the many weeks of close quarter fighting and the countless acts of bravery that took place, only 2 Victoria Crosses were awarded and both of these were posthumously.

The first was to Lance Corporal John Pennington Harman of the 4th Bn Queen’s Own Royal West Kent Regiment. 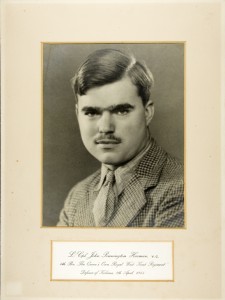 His citation reads: The following details are given in the London Gazette of June 20th, 1944:- At Kohima, Assam, on 8th April 1944, Lance Corporal Harman was commanding a section of a forward platoon. The enemy had established a machine-gun post within 50 yards of his position which became a serious menace to the remainder of his company. Unable to bring the fire of his section on to the post, Lance Corporal Harman went forward by himself and annihilated the post, returning with the enemy machine-gun. The next morning, having first recovered a forward position, he again charged an enemy post alone, shooting four and bayonetting one, thereby wiping out the post. As he returned Lance Corporal Harman received an burst of machine-gun fire in his side and died shortly after reaching our lines. Lance Corporal Harman’s heroic action and supreme devotion to duty were largely responsible for the decisive way in which all attacks were driven off by his company.

The second to be won was awarded to Captain John Niel Randle of the 2nd Bn The Royal Norfolk Regiment. 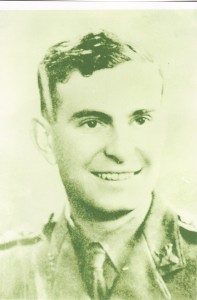 His citation reads: The following details are given in the London Gazette of December 8th, 1944:- On the 4th May, 1944, at Kohima in Assam, a battalion of the Norfolk Regiment attacked the Japanese. Captain Randle took over command of the company which was leading the attack. His handling of a difficult situation was masterly, and although wounded himself he continued to inspire his men until the company captured its objective. He then brought in all the wounded men who were lying outside the perimeter. Captain Randle refused to be evacuated, and despite his wound carried out a personal reconnaissance with great daring, prior to a further attack on the new enemy positions. At dawn on 6th May Captain Randle led this attack, and ran into heavy fire from a bunker. Appreciating that the destruction of this enemy post was imperative, if the operation was to succeed, Captain Randle charged the Japanese post single-handed. Although now mortaly wounded, he silenced the gun with a grenade thrown through the bunker slit. He then flung his body across the slit so that the aperture should be completely sealed. The bravery shown by this officer could not have been surpassed, and by his self-sacrifice he saved the lives of many of his men and enabled not only his own company but the whole battalion to gain its objective and win a decisive victory over the enemy.