Major John Jessop has decided to step away from the wheel at last to finally enjoy his postponed retirement from using his considerable administrative & management skills in the service of others.

After some 20 years of association with the Kohima Museum, first as assistant curator then as curator, treasurer & secretary to the trustees, then as a trustee and deputy chairman, John has called it a day. 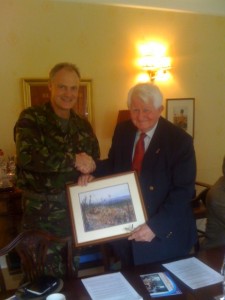 At the end of the 41st meeting of the Trustees, Major John Jessop was presented with a framed print of the famous painting of the “Battle of the Tennis Court” by Brigadier Greville Bibby CBE, the Commander 15 (North East) Brigade and Chairman of the Board of Trustees of the 2nd Divisional Kohima Museum Memorial Trust. The original painting of the print by Cuneo hangs in the museum on loan from Headquarters 2nd Division in Edinburgh.

During his long connection to the museum, John Jessop was instrumental in seeing the progress of the museum from being a loose collection of donated memorabilia through initial registration to full accreditation under the then current regulations of the Museum, Libraries and Arts Council (MLA), thereby bringing the Kohima Museum onto the same playing field as the Victoria & Albert Museum and the Imperial War Museum and the other big nationals.

As the number of Kohima Veterans declined, it was decided to reduce the Reunion weekend to a single day to include a memorial service in York Minster. It was at this time that the Kohima Educational Trust (KET) was formed. Major Jessop was a founder trustee of this charity and became the secretary and treasurer. The aim of the KET is to sponsor poor but talented Naga children to enable them to gain further education where they would not normally be able to afford it. In this way it was hoped that a small part of the debt which the 2nd Division owed to the Naga people could be repaid for the staunch and loyal support which they gave in the fight against the Japanese Imperial Army.

Now retired Major Jessop from the KET, the Museum and from any other office held, het still maintains his links with them as he still goes into work with SSAFA.