keep your eye on this page to see the progress of someone who can.

Until recently, the Kohima Museum in York concentrated almost completely on the British 2nd Infantry Division and the part this division played in the Burma Campaign. The artefacts and other items collected have reflected this and over the years many objects have been turned down as being outside this boundary.

It was also realised that this small unfunded museum was the ONLY museum in the whole of the UK that provided a window to the longest running campaign of WW2. The remainder of the many thousands of men and woman who served in India and Burma and their families can come to the Kohima Museum in York to discover just what the men wore and what weapons they used. They can also see details of the Japanese forces who they fought so desperately to defeat.

There is a small but growing section of the display area devoted to the legendary Chindits plus a display highlighting the vital and crucial part played by the Allied Air Forces.

The Kohima Museum of the Burma Campaign is in the final stages of getting approval for a new Charter from the Charities Commission.

In fact, it was the poet Simonides of Ceos (Kios) (586 – 468 B.C.), who immortalised it as: “Go tell the Spartans, thou that passest by,That faithful to their precepts here we lie.”.

The sentiment in the epitaphs is certainly Spartan in tone and the writers were influenced by their classical education. The first of them was written by J. M. Edmonds for a graveyard in France, circa 1916 during the First World War: When you go home tell them of us, and say ‘For your to-morrows these gave their to-day’

The author was Major John Etty-Leal, the G.S.O. II of the 2nd Division. He was a classical scholar and had imperfectly remembered what J.M. Edmonds had written. His version reads:
“When you go home, Tell them of us and say, For your tomorrow, We gave our to-day”.

The Minster Lodge of the York Freemasons have very generously donated £200 to the museum for the purpose of refurbishing a display cabinet to house a new display for Major General John Malcolm Lawrence Grover CB MC*.

The Doncaster Branch of the REME Association attended the Museum on a trip organised by WO1 (ASM) Bob Strachan. Some members of the Branch together with their Ladies were given a personal welcome by the Curator and then received a short presentation of the Battle of Kohima, after which they were invited to explore the museum before joining WO1 Strachan in the WO’s & Sgt’s Mess for lunch 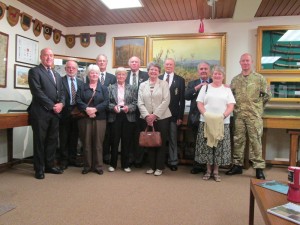 Doncaster Branch members of the REME Association with their Ladies

WO1 (ASM) Bob Strachan is on the right 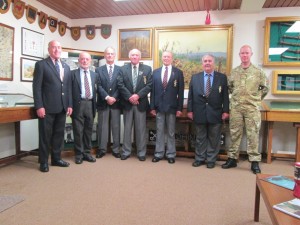 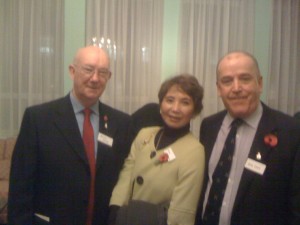